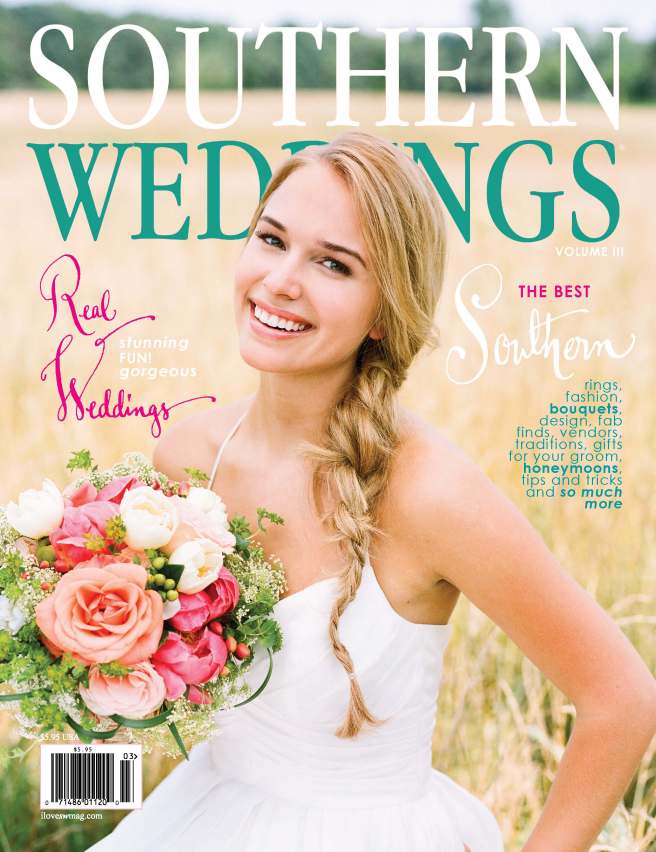 My little sister is getting married this Saturday so I thought a post on Southern weddings would be the perfect topic for today. Since I have lived in New York, I’ve really learned the extent of how truly different weddings are in the South as opposed to the northern area of the country. The first time I lived in New York right after college in 2011 I had to fly home 3 times to attend/partake in a wedding. When I would tell people why I was going home, they would immediately ask how old the person getting married was. Replying that they were all under the age of 23 always received a multitude of shocked looks and questions. People in the south due tend to get married at a younger age. I’m not sure why that is the case, I assume it goes back to the, in my personal opinion, dated idea that a woman’s career should be being a wife and homemaker. I know that some people find “the one” and want to make a commitment to each other and live happily ever after. You know what? More power to those people. That is just not for me. (If you see me at the wedding this weekend, please keep your questions about “why I’m not married/when my boyfriend and I are getting married” to yourself. I don’t want to be married right now. End of story). This article isn’t about the more shallow reasons weddings in the South are different though. It is about our commitment to tradition and etiquette (which also kind of explains why people get married so young as well: it’s tradition I guess…)

Although I grew up in the south and have attended many a southern weddings, I still wanted to read up a little on how the all knowing internet felt on the topic. Ehow.com says,”A Southern wedding should have an intimacy to the ceremony, but a larger than life feel to the reception.” Etiquette-guide.com says, “Southern wedding etiquette is all about tradition” and “Keeping with the family tradition, Southern weddings tend to be extremely large affairs…” Okay let’s address the size issue first since within the first two paragraphs of each of these articles they mention it. My sister’s wedding is going to be huge. Since I work at a lingerie store people are constantly coming in to buy wedding shower or bachelorette party gifts (is there anyone in New York not getting married?) therefore I often bring up my sister’s wedding as some common ground. The conversation starts with the usual, “When and where is the wedding?”, “What’s her dress look like?”, “You’re going to melt in Mississippi in June aren’t you?”. Yes, m’am, yes I am. But THEN they ask the other inevitable question: “What size is the wedding?” I always try to avoid answering this question by changing the topic to something completely absurd like “Have you seen Marilyn Manson’s newest music video yet?” (if anyone ever said yes I don’t know what I’d say) due to the reactions I have to endure once I tell them that there are 1200 people attending the reception. Go ahead wrap your head around 1200 bodies and get over your shock, I’m aware that’s an insanely large amount of people. Southern weddings are large. I’m not sure how many are that large but they’re large. To me, the south is actually very small. Everyone below the Mason Dixon line either knows each other or has heard of the other person and therefore my parents have a lot of friends. I honestly feel like i’m letting them down by not being at least halfway there with 600 friends at 25 years old. So add their friends to our family to my sister’s and I’s friends to her fiancé’s friends and family and you’re left with quite a huge number. And like I said there are just some things you have to do and apparently inviting 1,000 people you don’t know to your own wedding is one of them.

Another special aspect of Southern weddings is that they are all about tradition. Whether it’s wearing a piece of your mother’s wedding gown sown into your own or hosting the reception at your own home to show your roots, southerners love little personal touches to show off where they came from. I feel like a bad Maid of Honor not knowing in particular what personal touches my sister is using so I’ll just assume since it’s in tradition for everyone to love me, she wanted me to play a big part in the wedding to keep that going….kidding obviously. But in all honesty, I personally would love to attend a wedding where all they served was fried chicken, corn bread, home brewed beer, and a sweet tea vodka cocktail in a mason jar while the Ole Miss band played “From Dixie With Love” over and over in the background.

The last thing I feel is majorly important in separating weddings in the south from weddings anywhere else is the set of guidelines or wedding etiquette I guess I should say. As an example, my sister’s wedding is at 6pm and she wanted her groomsmen to wear light colored suits. I mean it’s going to be sweltering hot, she would have been doing them a favor. Of course though, because it’s an evening wedding and therefore seen as formal, she was informed that light colored suits are not appropriate and the groomsmen must wear tuxes. I feel up north, and correct me if i’m wrong, that rules such as these are viewed as old fashioned and people do whatever they want at their weddings. It’s the same reason people in the south refuse to wear white after Labor Day and people in the north wouldn’t think twice before prancing around in a white dress in October. I mean come on, it was still super hot in New York in October, why shouldn’t you wear white? Getting off topic sorry. Southerners like to abide by traditional manners and etiquette when it comes to weddings. Despite the fact that I do disagree with some of the rules, I do feel it brings about a certain air of classiness. When you’re attending a southern wedding you know never to wear white (that’s probably a rule everywhere) or black. I wore black to a wedding  once and I thought my mother’s head was going to spin around. You know everyone is going to be dressed in brightly colored floral dresses and linen suits/tuxes depending on what time the wedding is and there will probably be some kind of swing band. We’re not DJ people in the south.

It is almost guaranteed the wedding will take place in a church. The father will walk the bride down the aisle after the mothers and grandmothers have been seated by an usher and all 20 of the bridesmaids have been escorted by a groomsman to the alter. Typical. One thing I do love about southern weddings is how short the ceremonies usually are. Bride walks in with her father, priest greets everyone and tells a funny story, someone sings or reads a poem, we pray, vows are read, rings are given, kisses are exchanged and out the door they go. No one likes to hold up a party in the south, that’s just not something that’s done.

I hope this helped a little on not necessarily distinguishing the difference between northern and southern weddings but at least describing how we do it in the south. If I got anything wrong feel free to comment. This started to get a little long and I think my brain is mush from now not only planning things for the wedding but writing about it. Also one last side note: While googling southern weddings, I was presented with an abode of photos of brides wearing cowboys boots with their dresses, groomsmen in tuxes with camo vests, and opossum cakes where the cake looks like the animal and when you cut into the cake it’s red velvet *if you’ve never seen one of these considered yourself lucky. These weddings are NOT considered southern, they’re considered….I don’t know country? If you want to do anything of these things, go for it, it’s your wedding BUT don’t call your wedding southern. It’s not.

Just a girl living in New York City, the love of my life. I spend my days brunching, fighting off the urge to visit Barney's, Voguing, and searching for a way to make my dream of being the next Linda Fargo come true. View all posts by justluckeyiguess

One thought on “But what’s the etiquette on that?”

a beauty, style, and travel blog